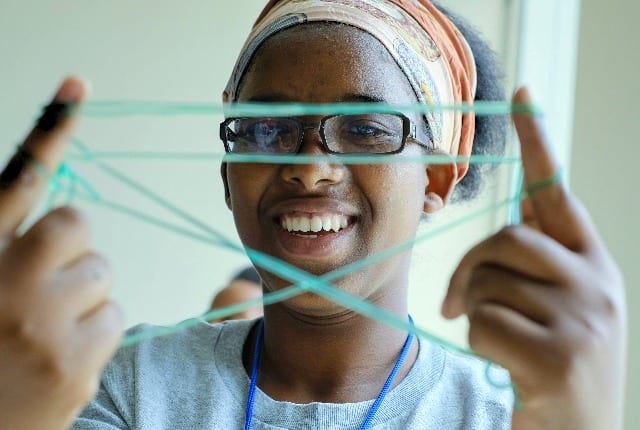 CampSpark brings together high school students from Southwest Houston who arrived here as refugees to engage in hands-on STEM experiments over the course of a week.

Ice cream frozen nearly instantly using liquid nitrogen can be found at some of Houston’s hippest restaurants. It was also found recently in a classroom at Rice University’s BioScience Research Collaborative. Here, refugee students from the Partnership for the Advancement and Immersion of Refugees (PAIR) attending CampSpark experimented with the best methods and milks for making the icy dessert and learned the science behind emulsions and freezing points while they enjoyed the sweet spoils of their labor.

CampSpark brings together PAIR high school students from Southwest Houston who arrived here as refugees from countries such as Democratic Republic of Congo, Eritrea, Iraq, Nepal and Sierra Leone to engage in hands-on science, technology, engineering, and mathematics (STEM) experiments over the course of a week. The activities ranged from shaking up bags of ice cream one day to extracting DNA from strawberries and dissecting animal hearts the next.

Now in its second year, CampSpark is one of the newest collaborations between Rice and PAIR, a nonprofit originally founded in 2006 by Rice students who saw a need to help empower refugee youth in the city. Engaging Houston for research and education is one of the goals of Rice’s Vision for the Second Century, Second Decade (V2C2). Today, PAIR is in its 11th year of empowering refugee youth to navigate American society, reach their academic potential and become community leaders through educational mentoring programs. PAIR serves refugee youth from shortly after their arrival to the United States through high school graduation and beyond.

“A lot of people don’t know that Houston is the No. 1 refugee resettlement city in the states, and so we have a huge number of people living here that are from other countries,” said Katelin Cherry, a research specialist in Rice’s Department of Bioengineering and co-founder of CampSpark along with fellow bioengineering graduate students Melody Tan and Alyssa Shapiro.

Before coming to Rice to earn her master’s degree in bioengineering, Cherry worked for another local nonprofit, The Community Cloth, which cultivated positive relationships with refugee women. It also cultivated in Cherry a desire to continue that work, which she did by teaming up with Tan and Shapiro to win a $3,000 GradStarter grant from Rice’s own Graduate Student Association last year to launch the inaugural year of CampSpark.

“I’m very passionate about the refugee community,” said Cherry. “They’re just amazing people. They’re resilient, they want to learn and they are just so full of passion for being in the United States.”

Tan began her work with refugee communities as a student at Cinco Ranch High School, where she volunteered to help resettle a group of Bhutanese refugees by gathering clothing, shoes, toys and household appliances. Tan has made progress toward her goal of greater refugee integration and outreach in the decade since, from working with the Rice 360° Institute for Global Health to helping establish CampSpark in 2017.

“Yesterday we had a panel of three professionals from immigrant and refugee backgrounds who shared about coming to the U.S., some of the obstacles they had to overcome and their career paths,” said Tan. She worked to secure presenters for CampSpark who could not only dazzle the students with science experiments but also relate to them on a deeply personal level.

“I want to make sure that immigrant and refugee youth know that we welcome them, that they can pursue any educational opportunities they choose and to introduce them to successful professionals from similar backgrounds,” said Tan.

Lachi is a returning student, an energetic senior at Westbury High School who was eager to come back for a second year at CampSpark. Since before her family was resettled here when she was 9 years old, Lachi knew she wanted to be a nurse. “To be a nurse in Nepal is really hard,” she said. “You need money, plus there are not a lot of good teachers.

“In my country, we don’t have this kind of program. There, there was no one to teach us.” But Lachi said that at CampSpark, she is getting the exposure to STEM education she’s always desired. And more importantly, she said, “I feel welcome here.”