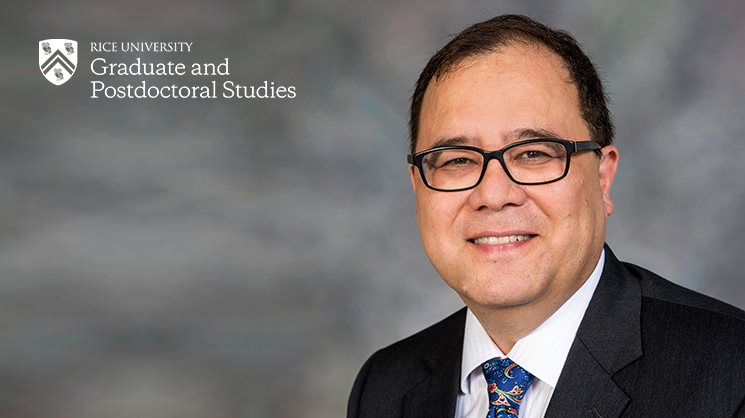 Seiichi Matsuda will serve as Rice’s interim provost while a search is conducted for the university’s permanent chief academic officer.

Matsuda, who also serves as Rice’s dean of graduate and postdoctoral studies, was named acting provost after Marie Lynn Miranda announced in May she was stepping down from her leadership position.

“I am thrilled and grateful that Seiichi has agreed to take on this important leadership role at a critical time for our university,” President David Leebron said. “Seiichi’s accomplishments and collaborative approach as dean of graduate and postdoctoral studies have earned him broad respect across our campus, and he is a trusted voice and participant in university leadership and strategy. He will enable us to continue implementing our strategic plan, the V2C2.”

“It is a privilege to serve as interim provost for this remarkable institution,” Matsuda said. “I look forward to working with students, faculty and staff to build on the momentum of the V2C2 in the coming months and with our new provost in 2020.”

Matsuda, who is also the E. Dell Butcher Professor of Chemistry and a professor of BioSciences, has been a member of the Rice faculty since 1995. He served as chair of the Chemistry Department from 2007 to 2014 before becoming dean of graduate and postdoctoral studies in 2014.

Under Matsuda’s leadership as dean, the applicant pools for Rice’s graduate programs have expanded as academic departments have gained greater recognition. New matriculants to Rice graduate programs have brought more than double the number of major national awards, such as Goldwater Scholarships and Fulbright Scholarships. Rice graduate students have won 86% more major fellowships, such as the National Science Foundation Graduate Research Fellowship and the Soros Fellowship for New Americans.

Matsuda, a recipient of the George R. Brown Award for Superior Teaching, has also strengthened Rice’s position as a major academic destination for Latin American scholars by tripling the number of doctoral students from that region. His focus on improving all aspects of graduate education at Rice is a key component of the V2C2 — the university’s Vision for the Second Century, Second Decade initiative.

Matsuda conducts research on terpenoids, the largest group of plant natural products. Terpenoids play essential roles in plant physiology and defense. Matsuda’s laboratory is searching plant genomes for the enzymes that make these compounds to illuminate the structural and evolutionary origins of terpenoid structural diversity.

The open provost position will be filled with the assistance of an executive search firm and a committee that will include faculty members and trustees. A new provost is expected to be named by the end of 2019.