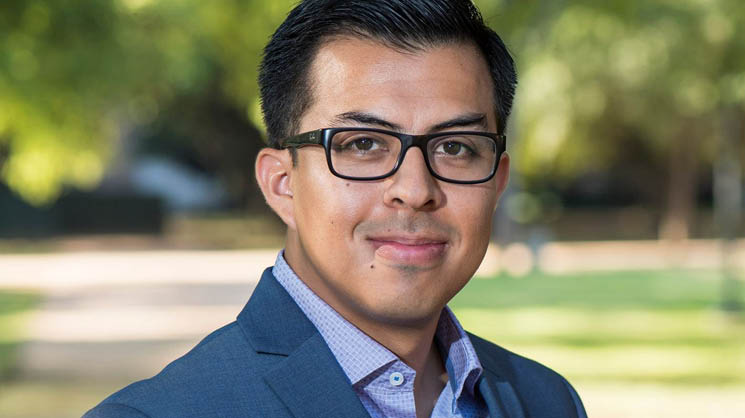 BWF’s Career Awards at the Scientific Interface provide scholars dedicated to careers in academic research with $500,000 over five years as a financial bridge between advanced postdoctoral training and the first three years of faculty service. The grants foster the early career development of researchers who are transitioning from undergraduate or graduate work in engineering or physical, mathematical or computational sciences and moving into postdoctoral work in biological sciences.

García-López, whose award funding started July 1, will be honored along with his fellow winners at a ceremony in North Carolina this fall.

“This award will really help me transition from a postdoc to an independent career and start my own research lab,” he said. “It also gives me the freedom to work on my own ideas and start thinking more as an independent researcher.”

García-López’s current research targets molecular machines that mechanically disrupt the plasma membrane and kill cancer cells and drug-resistant bacteria. The molecular machines are 1 nanometer in size and are only active when exposed to light. This nanotechnology approach is an alternative to conventional therapies that offers high-precision specificity and spatiotemporal control, lessening multidrug resistance and off-target side effects.

García-López will focus on understanding how the molecular machines interact with the cell membrane components and how they can trigger mechanical work on the membranes. The results will let him and his team optimize and modulate to help develop safer cancer treatments.

“In the field of molecular machines, most of the systems are applied in materials science and very little in medicine,” García-López said. “That’s what I want to focus on next — helping to integrate molecular machines more into biology and medicine.”

Lopez made it past several elimination rounds during an application process that lasted months.

“It gave me a lot of confidence after I found out the acceptance rate was less than 4%,” García-López said. “I almost didn’t apply because it is so competitive, and after each stage that I progressed, I thought it would be my last. When I got to the final stage, there were 22 of us and only half of us would earn awards.”

During the final stage, García-López had five minutes to present his research and ideas to a panel of scientists from a broad spectrum of research areas.

“It was difficult to prepare for that presentation, because I am trained to give presentations for around an hour,” he said. “I practiced a lot and had to keep my message broad enough so it would resonate with the scientists who aren’t as familiar with my field.”

García-López, who earned his doctorate in chemistry at Rice in 2016, worked as a chemistry postdoc at ETH Zurich in Switzerland before returning here to continue his career.

“Victor was a terrific graduate student, opening the door for nanomachines to be used in medicine,” said James Tour, the T.T. and W.F. Chao Chair in Chemistry and a professor of computer science and of materials science and nanoengineering at Rice, as well as García-López’s mentor. “Those synthesis are now the basis for newer and more selective molecular nanomachines upon which Victor hopes to capitalize during this post-doctoral year and maybe into his early years of independent research.”

His graduate research at Rice involved designing and synthesizing the first examples of light-activated molecular machines capable of translating on conductive and nonconductive surfaces, enhancing their diffusion in solutions and selectively killing cancer cells. His work provided molecular prototypes that set the path for future molecular machines with everyday applications, such as stimuli-responsive therapies and biomaterials, and molecular machines for cargo transportation and delivery in bottom-up fabrication techniques.

García-López and his team developed a nanocar, an electrically driven molecular machine, that won the 2017 Nanocar Race in Toulouse, France, by completing a 150-nanometer course in about 1½ hours. Some cars never crossed the finish line in the allotted 30 hours.

A native of Monclova, Mexico, García-López is passionate about participating in outreach programs. Via Skype, he speaks with Mexican students from low-income primary schools and gives virtual chemistry lectures.

“I want to be the mentor to these students that I never had as a young student,” he said. “It’s also very important to me to train new students and help them to be independent. It’s not just about my own research. Helping to form the next generation of scientists is a huge privilege.”

The Burroughs Wellcome Fund is an independent, private foundation dedicated to advancing the biomedical sciences by supporting research and other scientific and educational activities.