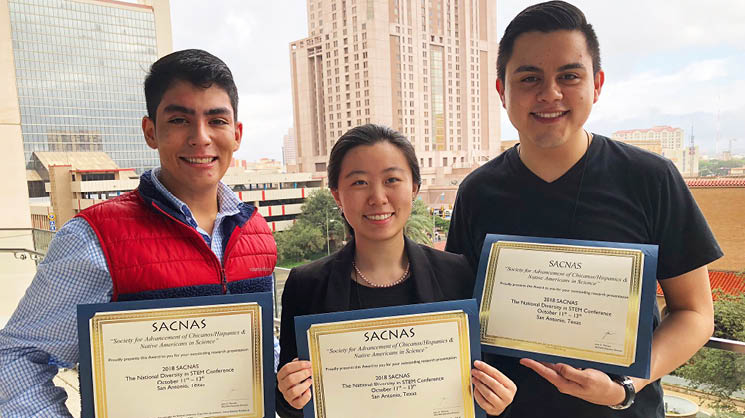 Rice Biosciences graduate student Jose Olmos won an Outstanding Research Presentation award at the 2018 National Diversity in STEM Conference. The conference is held annually by the Society for Advancement of Chicanos/Hispanics and Native Americans in Science (SACNAS).

“It is my honor to share that Jose’s communication skills and command of the research topic were exemplary,” said Kateryna Poradiuk, SACNAS student programs manager, noting “the hard work, dedication, and sacrifice necessary for a student to stand out from their fellow presenters.”

Olmos said he was impressed with his fellow presenters and was honored to win the award.

“It’s always nice to be recognized as someone who is effectively communicating the science,” Olmos said. “After my oral presentation, students at the conference later came to find me to talk about the work and ask for more of the details, which was nice because I was not expecting that.”

Olmos, who is advised by Phillips, researches method developments for time-resolved crystallography.

“We want to develop movies of proteins,” he said, “so we can see how specific proteins function. This would allow us to better understand how enzymes carry out their catalysis, compared to the more static models that we currently have.”

Olmos said he has enjoyed his time at Rice, calling it “very collaborative.”

“The feedback that I’ve gotten has helped me further my research career,” he said, “and has helped me improve as a scientist. Now, I want to bring new talent to Rice and hope that more students attend graduate school here.”