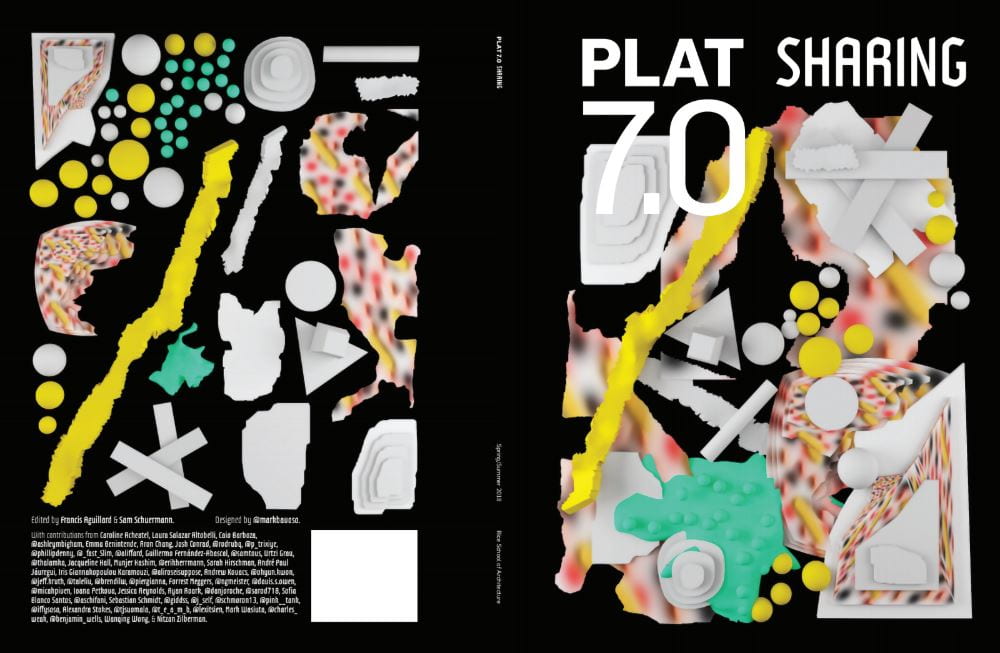 Rice Architecture’s student-produced PLAT Journal has earned honorable mention from the Center for Architecture as part of the 2019 Douglas Haskell Award for Student Journals.

PLAT was one of just three publications recognized in the national competition. The University of Oklahoma’s Telesis won the top prize ($2,000), with the University of California, Berkeley’s Room One Thousand joining PLAT in receiving honorable mention ($500).

PLAT is an independent, biannual architectural journal intended to stimulate relationships between design, production and theory. It weaves professional and academic work in an open dialogue that progresses from issue to issue. PLAT welcomes submissions from both architects and non-architects in the form of essays, projects, case studies, interviews, oral histories, fictions, drawings, anecdotes, jokes and memes.

“In its short history, the student-initiated PLAT has emerged as an intellectual voice to be reckoned with,” said John Casbarian, interim dean of Rice Architecture and the Harry K. and Albert K. Smith Professor of Architecture. “Every issue is tightly edited, stunning graphically, brilliantly cohesive and exhilarating to read, all the more so knowing that it is the result of an effort by only a handful of students.”

“A student organization that operates mostly independently without institutional oversight, PLAT is a remarkable opportunity for architecture students at Rice,” Murphy said. “The journal is incredibly open-ended, as it is shaped by the interests of the students organizing its production. It is a chance to take a chance, to test out new ideas, to forge a personal connection to what is under consideration within the world of architecture, which lately, is everything.”

Each issue of PLAT focuses on a theme. Issue 8.0, which will be published this fall, centers on simplicity. It will address issues such as how contemporary understanding of simplicity can further architecture that prizes directness without sacrificing subtlety. It will ask whether simplicity is not only an aesthetic concern, but also an ethical one.

“It’s been a pleasure to work on a student-run independent project and engage with our community of students and professors at Rice Architecture,” Xu said. “They have helped with editing, graphics, transcription, and have been very supportive for bouncing off ideas.”

This year, PLAT experimented with different formats, creating a digital half-issue and developing a mail-out poster.

The Haskell Award for Student Journals was established by Helen Lacey Haskell, the wife of architectural journalist and editor Douglas Haskell in the late 1980s. Its purpose is to perpetuate intelligent writing about design as a means to encourage the development of architects and allied professionals.

“Recognition by the Center for Architecture means that our journal is doing something that is worthy of attention,” Murphy said. “Recognition by one’s peers is the highest form of achievement. I take it as a signal to keep doing what we’re doing as we finish up issue 8.0 and prepare to hand off the outfit to the next wave of ambitious Rice Architecture students.”

PLAT issues can be purchased at www.platjournal.com.