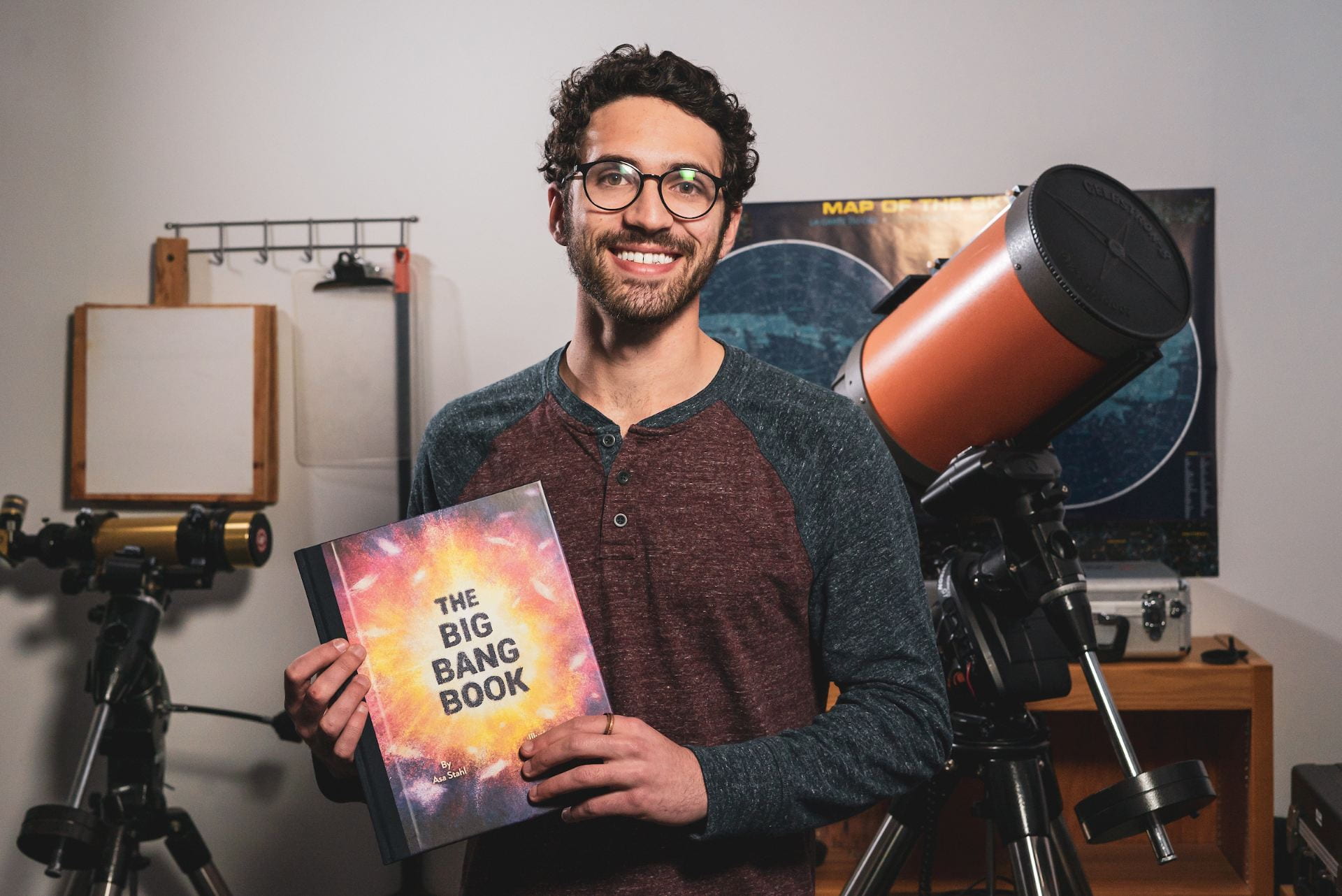 As a kid, Rice graduate student Asa Stahl memorized a famous excerpt from Carl Sagan’s 1994 book, “Pale Blue Dot.” The passage describes the Earth and everyone who’s ever been on it from the aloof and distant perspective afforded by interstellar space, “… a mote of dust suspended in a sunbeam.”

It wasn’t just the vast astronomic scale of Sagan’s reflection that captured Stahl’s attention as a child; it was the poetic language Sagan used, too. And now, as an adult, Stahl will soon release his first children’s book, inspired in part by the intrigue that Sagan’s words evoked all those years ago.

“The Big Bang Book,” which comes out April 7 in hardcover, was illustrated by Stahl’s collaborator in England, Carly Allen-Fletcher, and presents the mystery of how the universe began in a way that’s easy for anyone to understand.

It’s a project that was particularly fitting for Stahl: The graduate student is pursuing his Ph.D. in physics and astronomy at Rice, and his mother is celebrated children’s book author Marissa Moss, best known for the Amelia’s Notebook series.

Stahl has helped his mother sift through submissions from other children’s book authors since she launched her own publishing company six years ago. This is how he first encountered Allen-Fletcher, who had pitched an illustrated history of the Big Bang.

“She brought up topics complex enough to deserve a book of their own,” Stahl said, such as evolution, which were too tangential to the main theme of the book. A children’s book would need to be simplified, stripped of jargon and excess words, kept firmly on topic.

“When I gave my comments, my mindset was more along the lines of, ‘Oh well, another attempt at science communication that falls short. Maybe someday I’ll do better,’” Stahl said. “But I never thought I’d do it right then.”

Before he knew it, and without ever meeting in person, Stahl had created a book with Allen-Fletcher that captures the entire concept of the origins of the universe in what is essentially a paragraph.

Most of the space in “The Big Bang Book” is committed to lush illustrations, with only a few important words per page. This was by design.

“It was excellent practice for me as a science communicator to be able to tell a story to children in this way because it shows not only do I understand this stuff, but that I can communicate it well, to anyone,” said Stahl, who plans to continue research and science communication after completing his Ph.D.

“It’s always harder to tell a story in fewer words and with simpler words, but it really goes to show how well you know a subject,” Stahl said. “It would be much easier for me to write a five-page essay on all of this than it was to write, you know, less than a paragraph.”

Even then, he said, he couldn’t resist an author’s note that explains much of the science. The book also comes with annotated sources for teachers or parents to reference, as well as lesson plan suggestions for making the most out of the material.

“I think it’s important for the general public to understand what and how science is pursuing,” Stahl said. “Educating the public on discoveries forwards the cause of science just as much as making the discoveries themselves.”

Most of all, Stahl said, he wanted to make a book that was re-readable.

“I distinctly recall the books that I read a bajillion times as a kid — or rather that I had my mother read to me a bajillion times as a kid — and I hope that ‘The Big Bang Book’ would be one that a parent would not resent reading too much,” Stahl said. “In the first place, because the illustrations are just, you know, really, truly beautiful. And in the second place, because of the way I’ve built the language.”

If a reader thinks carefully about what Stahl has included in the sparse prose, he said, they should be able to figure out what he is not stating, through an intentional omission of words.

“Maybe that wouldn’t be obvious on the first read through, but if you read through it again and again and again, you might start thinking, ‘Hmm, maybe there was a reason he said this and not that and I wonder if that means we don’t know this thing or whether it’s really complicated. Maybe I can look that up or ask some friend of mine who might know,’” Stahl said.

“And I think that would be a pretty cool side effect, maybe a fun thing for parents, too.”