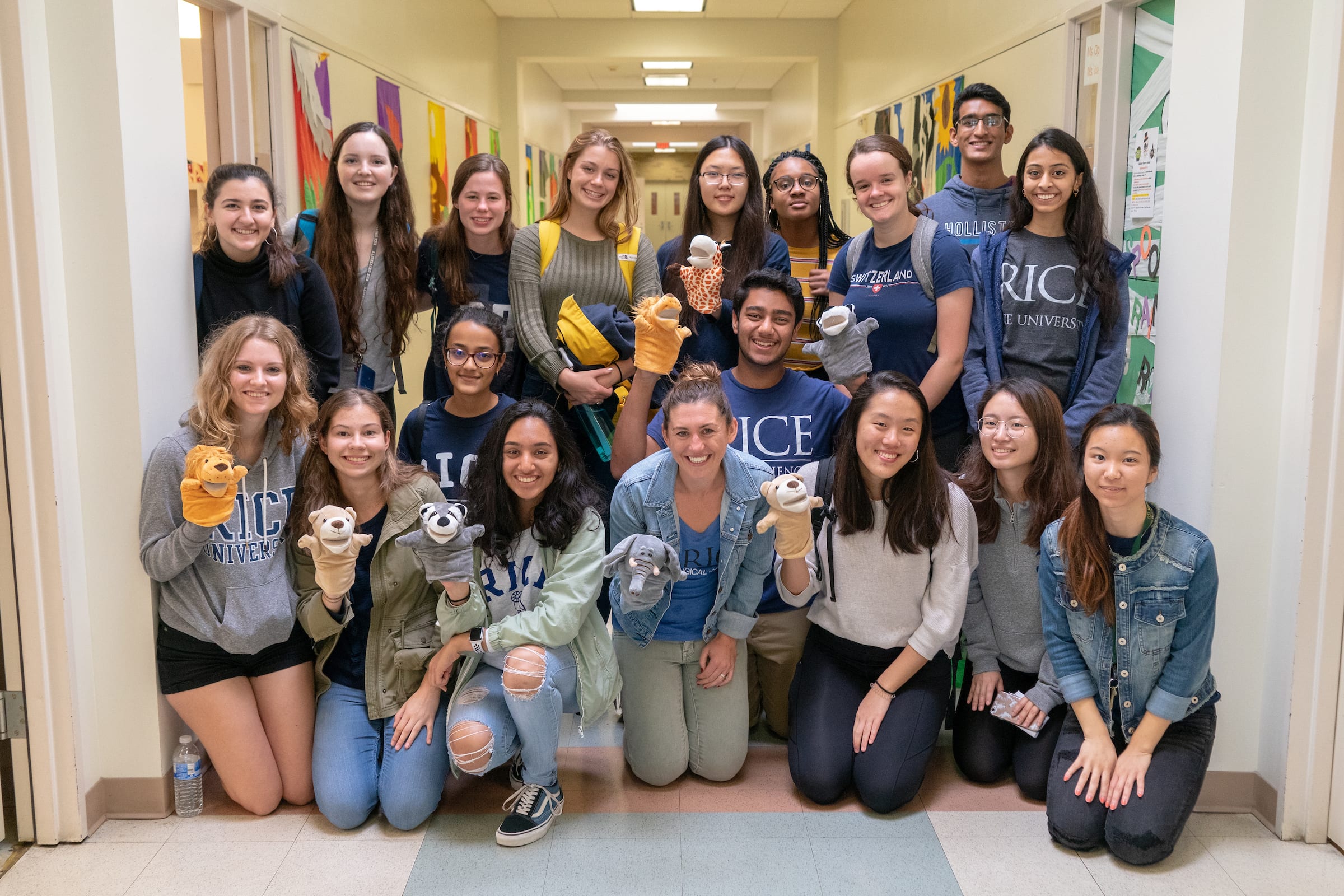 Working with your hands takes on a new meaning in course on disability and inclusion.

Bubbles the Elephant had one arm and excelled at playing basketball. Down the hall, a one-armed raccoon was doing the slam dunking.

Which character was missing a tiny felt arm in which room was beside the point. What mattered was that they were puppets appearing in the classrooms of the First Christian School on Sunset Boulevard, and they were teaching children a valuable lesson about disabilities and inclusion.

“Left Out: The Intersection of Disability and Society” is a First-Year Writing Intensive Seminar (FWIS) taught by graduate student Christy Nittrouer. FWIS courses are required for all Rice freshmen and, despite the name, they focus on much more than just writing. All forms of communication are covered in a FWIS, including persuasive speeches and oral presentations – as well as, in Nittrouer’s course at least, script writing and puppetry.

“Really, the point of the class is to get exposed to all aspects of what a disability identity means,” Nittrouer said. Her FWIS students began by examining novels in which disabilities feature prominently; their readings progressed into theoretical psychological research and they’re currently deep into empirical literature.

“What we wanted to do is take what we’ve learned from those readings and apply it in a way that starts the discussion of abilities and difference at a young age,” Nittrouer said.

Jones College freshman Ishaan Rischie has an 8-year-old sister and a natural affinity for working with younger kids, such as those in the toddler and preschool classrooms at First Christian. Nittrouer noted that may be the ideal audience for learning about concepts such as inclusion.

“You just have to spell out all the messages for them,” Rischie said, still sporting a lion puppet on one hand. And if the message is effectively communicated, there’s a better chance these children will be able to apply it in real-life situations later on. This, Rischie said, is just one reason he was excited to participate in the puppet productions.

“This is our first time leaving campus and doing some sort of community service,” Rischie said. “A lot of the time you can get stuck at Rice, and here in the academic community you don’t really get to see the effects of (your work).”

McMurty College freshman Sally Yan nodded in agreement. “The point of learning stuff is to apply it to help other people, especially to help the community, and this is a small taste of doing that,” she said.

The short script for the puppet show was written by committee; some students were assigned to create the characters and others wrote lines. They brainstormed as a group about the questions they wanted to ask their audiences and decided on a central message they hoped the kids would take away from the show. Nittrouer wrote a FWIS supplement proposal to secure funds used to purchase the puppets and collapsible puppet show theaters, which were donated to the school following the final show.

A doctoral candidate who’s currently progressing towards her Ph.D. in industrial and organizational psychology, Nittrouer’s zeal for the topic was evident in the energy she and her FWIS students brought to each show.

“This is something I feel really passionate about and lucky to be able to be involved with.”