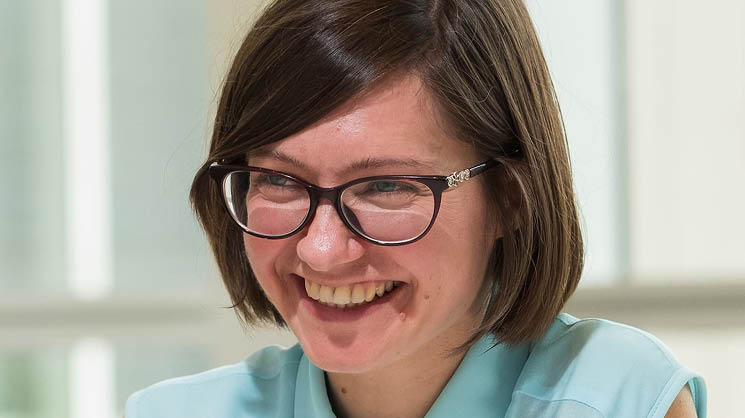 Rice University and Baylor College of Medicine today announced that genomics researcher Olga Dudchenko, whose pioneering work has made it possible to reconstruct the genome of a new species for under $1,000, has been named to MIT Technology Review magazine’s 2019 list of Innovators Under 35.

The original Human Genome Project, which determined the sequence of DNA letters in a typical person, took decades and cost more than $3 billion. Dudchenko, a postdoctoral fellow at Rice’s Center for Theoretical Biological Physics (CTBP) and a postdoctoral associate at the Center for Genome Architecture at Baylor College of Medicine, has developed a method to sequence and assemble the genome of any organism or person, to a similar level of quality, for less than $1,000.

Center director Erez Lieberman Aiden said Dudchenko’s methods, when combined with the latest advances in DNA sequencing, enable genomes whose completeness and accuracy would previously have been impossible. Her groundbreaking work helped researchers fighting the Zika virus in 2017, and she later co-founded DNA Zoo (dnazoo.org), a global network that’s used the method to assemble genomes for more than 60 endangered and vulnerable species.

“We now assemble genomes much faster than we can publish them” in peer-review journals, Dudchenko said recently, just hours after returning from a trip to train collaborators in Australia and China in the use of the genome assembly tools she has developed. After publishing her methods in the elite peer-reviewed journals Science (2017) and Nature (2018), she made a conscious decision to get them into the hands of as many people possible. With colleagues at the Center for Genome Architecture, she created easy-to-use tools that require no formal training in genomics or data science.

“Our approach makes the problem of genome assembly, which used to be very abstract, much more transparent and visual,” Dudchenko said.

“It’s kind of like playing Tetris,” she said while demonstrating the software. “See how I am moving things, putting them together, like solving a puzzle. You just keep moving the pieces until the image starts to make visual sense. That’s when you know you’ve got the genome right.”

Dudchenko said one reason that she and Aiden, her postdoctoral mentor, decided to launch the DNA Zoo effort was to streamline the process for creating and sharing genome assemblies for endangered and threatened species.

“Olga is an amazing scientist, and her methods have had a transformative impact on genome assembly,” said Aiden, a senior scientist at CTBP, assistant professor of genetics at Baylor and adjunct assistant professor of computer science at Rice. “Today, it’s just not possible to create a first-rate genome without using at least some of the ideas from her work.

“Each of the end-to-end genome assemblies she’s put together is the beginning of its own unique story,” he said. “Her work on the cheetah, for example, has led to a collaborative effort with the cheetah conservation community to use cheetah genomics to inform mate selection. And her work on the peanut genome will likely accelerate research into increased crop yields and better drought resistance.”

The annual TR35 list recognizes 35 technologists under age 35 whose breakthroughs have great potential to transform the world. Awardees are recognized in five categories: inventors, entrepreneurs, visionaries, humanitarians and pioneers. Dudchenko, an honoree in the inventor category, and other members of the 2019 class will be featured in MIT Technology Review’s July/August print issue and at the magazine’s flagship conference in Cambridge, Massachusetts, in September.

More information about past and present TR35 winners and judges is available here.