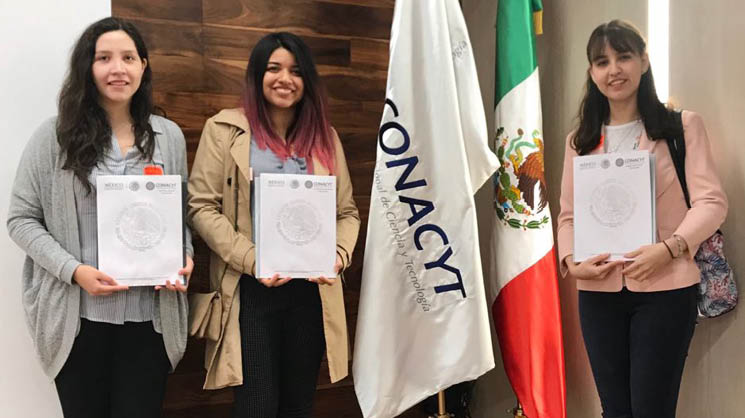 Three Rice University graduate students were awarded fellowships from Mexico’s Consejo Nacional de Ciencia y Tecnología (CONACyT). CONACyT, equivalent to the National Science Foundation in the United States, promotes scientific and technological research in Mexico and sets government policies related to those activities.
Viridiana Leyva and Cecilia Martínez Jiménez of Chemistry, and María José Peláez Soní of Applied Physics traveled to Mexico City in early August to accept the award, which covers tuition and a substantial portion of the students’ stipends over a period of four years.
“This year, there were only 271 fellowships awarded,” said Leyva. “It’s exciting to be one of the winners.”
The CONACyT Scholars Program is one of the most prestigious scholarship programs in Mexico for postgraduates. Fellowships are awarded to increase the scientific, technological and innovation capacity of the country and contribute to its development.
“Going to accept the award, you get to talk to people that are doing their Ph.D. in the U.K. or Australia or Germany,” Martínez Jiménez said. “You get to meet all the other winners from many different fields studying in different places, which is great.”
The three Rice winners, all graduates of Mexico’s Tecnológico de Monterrey, said they would encourage other students to apply for fellowships. They noted that the award has made them more marketable as prospective students.
“Do it,” said Leyva. “It does take time, but it’s worth the time you spend on it. You get to prove to yourself you can win the fellowship which feels good, but you are also showing your adviser you are trying to help them. Awards like this allow your adviser to invest more in your project.”
Peláez Soní agreed, and suggested students use the resources available to them.
“If you need help with administrative details, the people in your department will be supportive; they want to help you,” she said.
All three are first-year students at Rice. They are encouraged by the award and are excited to continue their research careers here.
“Rice is well-known, and so you have a great impression before getting to campus, but once you actually experience life at Rice that impression is all the better,” Leyva said. “It’s just so exciting being in the lab, talking to people and seeing the research done. And there’s so much new stuff they are coming up with. The allure of research is the thrill of discovery.”